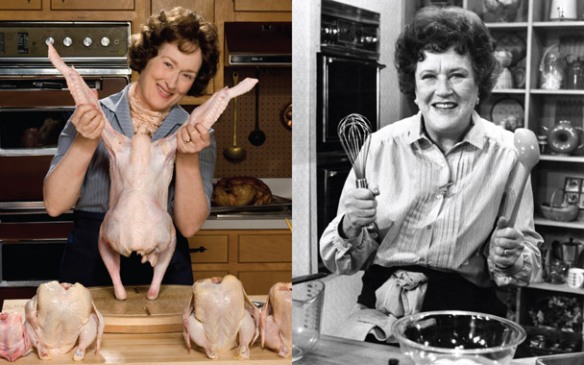 My girlfriend decided we should watch this after I said I was setting up a blog. She actually but it on the pad via my Love Film subscription while I was still setting up this webpage and have to admit the first 10 minutes my attention was more on the website rather than the film.

As the film continued I found myself paying less attention to the site and more not to the film but to Merlyn Steep. Now I have to admit I have never been a huge of hers… well so I thought. Maybe its just the fact I’m only twenty seven year’s old and most of the movies she appears in are probably not aimed at me or that I have not actually seen most of her films at all.

As I continue to watch and then start to realize as I am in fits of laughter from her performance that every film I had seen her in recently she was phenomenal. So there you have it non-Streep fan to fan in one evening.

The film is a true story of two people, Julia child a famous American food writer’s early life learning to cook in 1950’s France and Julie’s life set in the modern world stuck in a job she neither loves nor hates. They both are at crossroads in there life and both do not know what to do with them selves.

The main focus on the film is not on Childs but Julie a set in New York living in queens above a pizzeria all her friends are succeeding and she seems stuck. So she decides to start a blog and sets herself a chanllenge of cooking all of Julia’s recipes from her first and most famous book in all over 500 recipes in one year. The two stories unfold and show the different struggles of both trying to find there place in the world discovering that while they are cooking they are at there most happiest.

Although the main focus is on Julies cooking of Julia Child’s recipes it’s hard to get attached to the character well played as they are. Just because the story of child’s is much more interesting and played better by Streeps stand out performance in a other wise average cast. Amy Adams didn’t have much of a chance competing with the story of one of the greatest cook books ever written. And lets face it Julie Powel’s story is just about a blogger!

All round worth a watch just to see Meryl Streep in action, Who knew that she could be so funny.

From an early age I have always had an interest in films but it wasn’t until I was in my teens that I realized that this interest had started to turn into an obsession. Many a late night was spend scanning the channels for any film of interest and let me tell you channel 4 had some strange films on at 3 in the morning. When I became older and had access to my first DVD player things got really out of control buying anything and everything I could get my hands on. Since then I have watched from my estimation over 2,500 films. This obsession continues until this day, so I have finally decided to join in the modern world and share my obsession with all the other nutcases on the web, I have never seen the appeal of blogs but what do I know I thought Titanic was bad film and look how well that did.

Lets start with the basics

From the United Kingdom currently living in London where I have lived my entire life.

Now that’s out the way lets get on to a more important subject films, movies which ever you like to call them from whatever generation films have had a great influence over a lot of people. This is the story of my life with films. I will try not to bore you with my life story but I want this to be more than just reviews of films or a list of films I have watched. I want to look more in to how moves make us feel. Movies have a great influence over our emotions and I want to share my experience’s with you I hope you enjoy the bog.

I would love to have any feedback you may wish to give you can email me on mylifewatchingfilms@gmail.com